Cooking with Baking Soda, Baking Powder
and
​Self Raising Flour 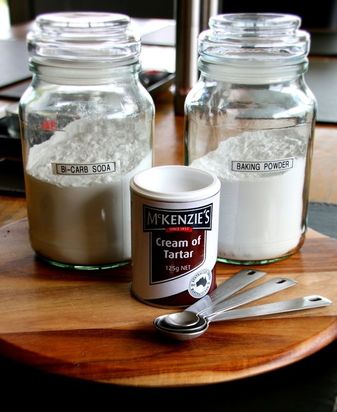 It is a chemical compound (NaHCO3) which is composed of sodium and bicarbonate ions. It is alkaline.
When used in cooking, sodium bicarbonate is a leavening (raising) agent.  It needs to be mixed with both moisture and an acidic ingredient (such as lemon juice, yoghurt, honey, vinegar or buttermilk) for the necessary chemical reactions to take place. When sodium bicarbonate reacts with acidic components in batters, carbon dioxide is released, resulting in expansion of the batter (also called 'rising').

​Heat (at temperatures above 80°C) can also cause sodium bicarbonate to act as a raising agent by releasing carbon dioxide when the batter is being baked. However, if no acid is present, sodium carbonate is produced instead of carbon dioxide. Sodium carbonate is alkaline and will result in a bitter, "soapy" taste. Hence the need for an acid component to be added when cooking with Baking Soda.
If you are cooking with Baking Soda, you will need to add some type of acid to your mixture to react with the Baking Soda, such as

You will need just enough Baking Soda to react with the amount of acid in your mixture.
Too much Baking Soda for the amount of acid present, will leave some Baking Soda unreacted resulting in a bitter or soapy flavour.
​
Baking Powder contains both sodium bicarbonate (Baking Soda) and an weakly acidic ingredient such as cream of tartar or monocalcium phosphate.  To activate it, moisture is added. As all the acid required is already present in the Baking powder, the batter itself doesn't need to contain an acidic ingredient. In fact, adding baking powder to a batter with an acidic element can mean that the acids in the baking powder are not consumed and may leave an unpleasant taste in the food.
Some commercial baking powders also contain aluminium salts to absorb the moisture that would otherwise destroy the leavening potential of the mix, so buy aluminium-free baking powder, or make your own.
Because Baking Powder is activated as soon as a liquid is added to it, and the carbon dioxide bubbles are then being produced causing the mixture to expand, it is important to get your mixture into the oven quickly once your wet ingredients have been added to the dry ingredients.
​
"Double acting" Baking Powder contains two acidic components. These acids can be either fast-acting or slow-acting. A fast-acting acid will react with baking soda at room temperature, wheras a slow-acting acid will not react until it is heated in the oven.
If the baking powder contains both fast-acting and slow-acting acids it will produce an initial 'rising' while the mixture is still cold, and a second 'rising'  when the mixture is heated in the oven. This makes Double Acting Baking Powders more reliable for baking and makes the time-gap between mixing and baking less critical.
Commonly used low-temperature acids are monocalcium phosphate (calcium acid phosphate) and cream of tartar. High-temperature acids used include sodium aluminium sulfate, sodium aluminium phosphate, and sodium acid pyrophosphate.  Again, if you would like to avoid exposure to aluminium salts, look for aluminium-free baking powders.

Making Baking Powder
​
1. Make it up as required:

2. Pre-make a Baking Powder mix .
This mix has as added element (either cornstarch or arrowroot) to absorb moisture.

Sift together and add either ​
Store in an airtight jar for up to a year.
To test baking powder and see if it is still fresh, mix a little with water. If it doesn't start getting foamy, it is no longer active.

Many recipes require different ratios of baking powder to plain flour to achieve the desired leavening (rising). These recipes usually use plain flour and baking powder as separate ingredients.  An example is banana cake, which has a heavier batter and will require more baking powder to rise it.  If you are baking with natural cocoa powder, yoghurt or buttermilk,  an extra 1/4 teaspoon of bicarbonate of soda added to the baking powder is usually required for a good rise.

To make your own Self Raising Flour:

Combine (sifting is best) together

OR If you don't want to use pre-made Baking powder

Store in an air-tight container for up to a year.

​​Printable Reference: Available in pdf or jpg below